This morning that other shoe dropped and Florence was declared a major hurricane by the National Hurricane Center. Rapid intensification did occur with Florence overnight, but not the fastest by any means that we have seen for a tropical cyclone. Before moving on to many messages containing very important information in association with the future effects of Florence on the public, let’s list attributable climate change factors researchers are looking for with any tropical cyclone:

1) Record strength per relatively high latitude (For example, if Florence moves in near Wilmington, NC or further north as a cat 4 this would be the farthest north a cat 4 or higher storm has made landfall in the U.S.)

If anyone can come up with other factors in association with a warming atmosphere and higher sea surface temperatures interacting with tropical cyclones let me know, and I’ll add them to this list. Obviously, all of these factors mean more bad news for people who will be struggling along the coast fighting rising seas as we move through the 21st century and beyond.

Here are some of today’s messages, which will be kept for posterity, in association with Florence. As I wrote yesterday, I’m not going to second guess the National Hurricane Center, the best and most trusted source, unless guidance greatly deviates from their forecast. Usually if models go in a different direction NHC will make adjustments. I will snapshot model scenarios, but all reading this post should follow NHC as presented by The Weather Channel to get the best forecast.  I will group information in this fluid post under each six hour period in which model guidance is processed. The latest guidance will be at the beginning of the article with archived prior messages kept towards the end of Monday’s Diary. I’ll label each group with the time models are processed. So here we go:

Information coming in after the 00Z Tuesday models from 9/11/2018 were processed:

Some structure changes happening with #Hurricane #Florence tonight. Flo is proceeding through an eyewall replacement cycle (ERC), but at the same time wanting to give the pinhole eye one last hurrah. pic.twitter.com/VslGE56OD1

The 00Z TUE GFS has come in better alignment with other models for #HurricaneFlorence being faster and a little further south. Most of the coast of North Carolina gets raked, but this time storm does not eject into the Northeast. 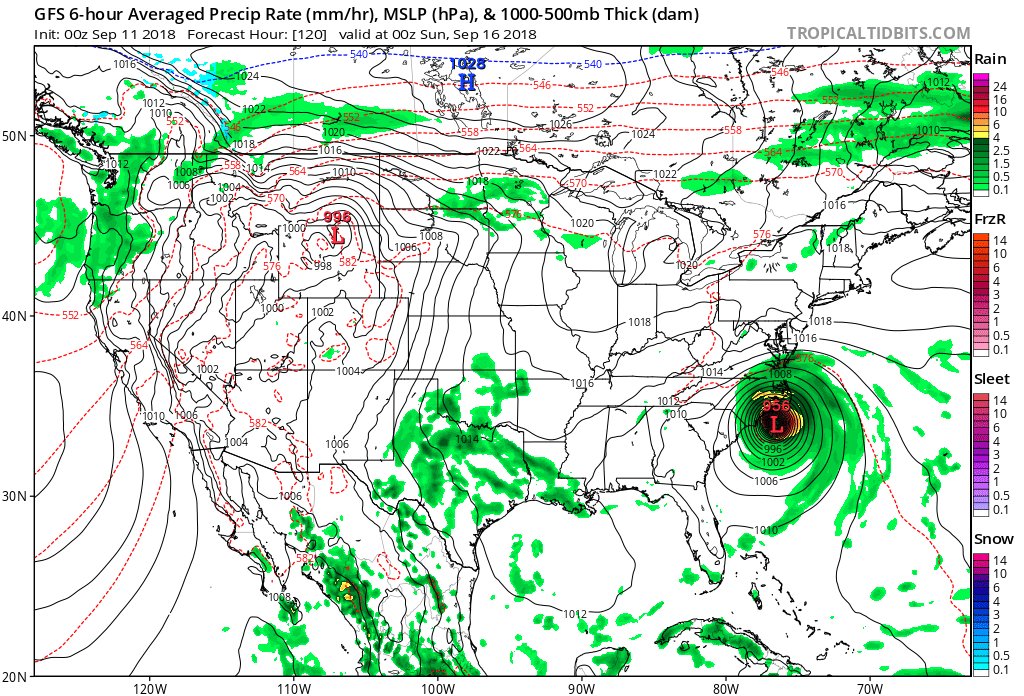 #Florence is unprecedented, yet part of a trend:

Information coming in after the 18Z Monday models from 9/10/2018 were processed:

We often thank EMs and 1st responders,  rightfully so. Keep meteorologists in your thoughts and prayers too. They will be working long hours…and it is not fun to watch something headed towards you that causes suffering and pain #dontPullforthestorms #nothingFavorableaboutthem 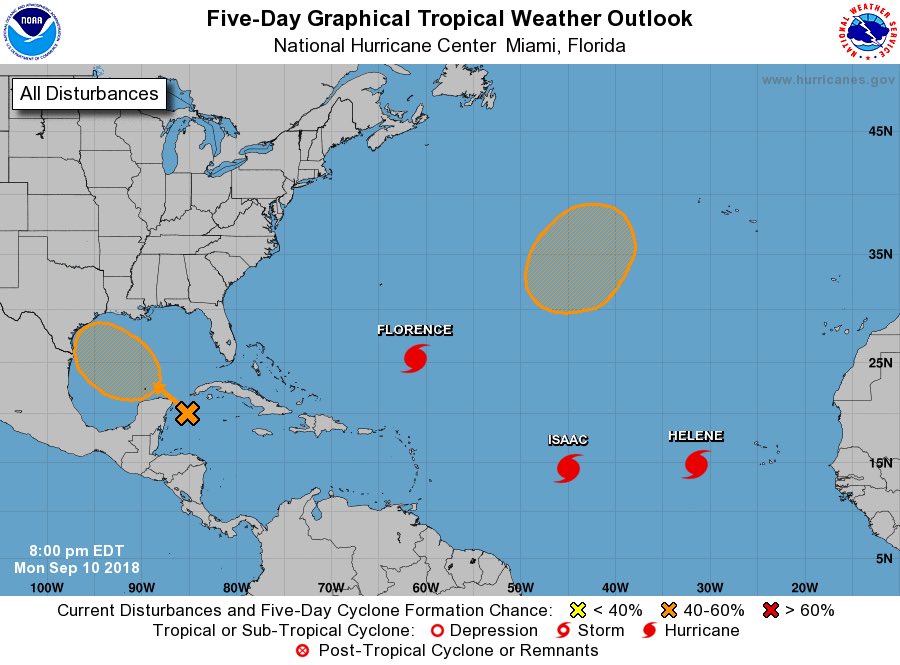 Over the last 24 hours, #Hurricane #Florence rapidly intensified from a category 1 to a category 4, increasing max winds by 45kt, and decreasing min pressure by 36hPa.
Here’s how that compares to past Atlantic tropical cyclones. 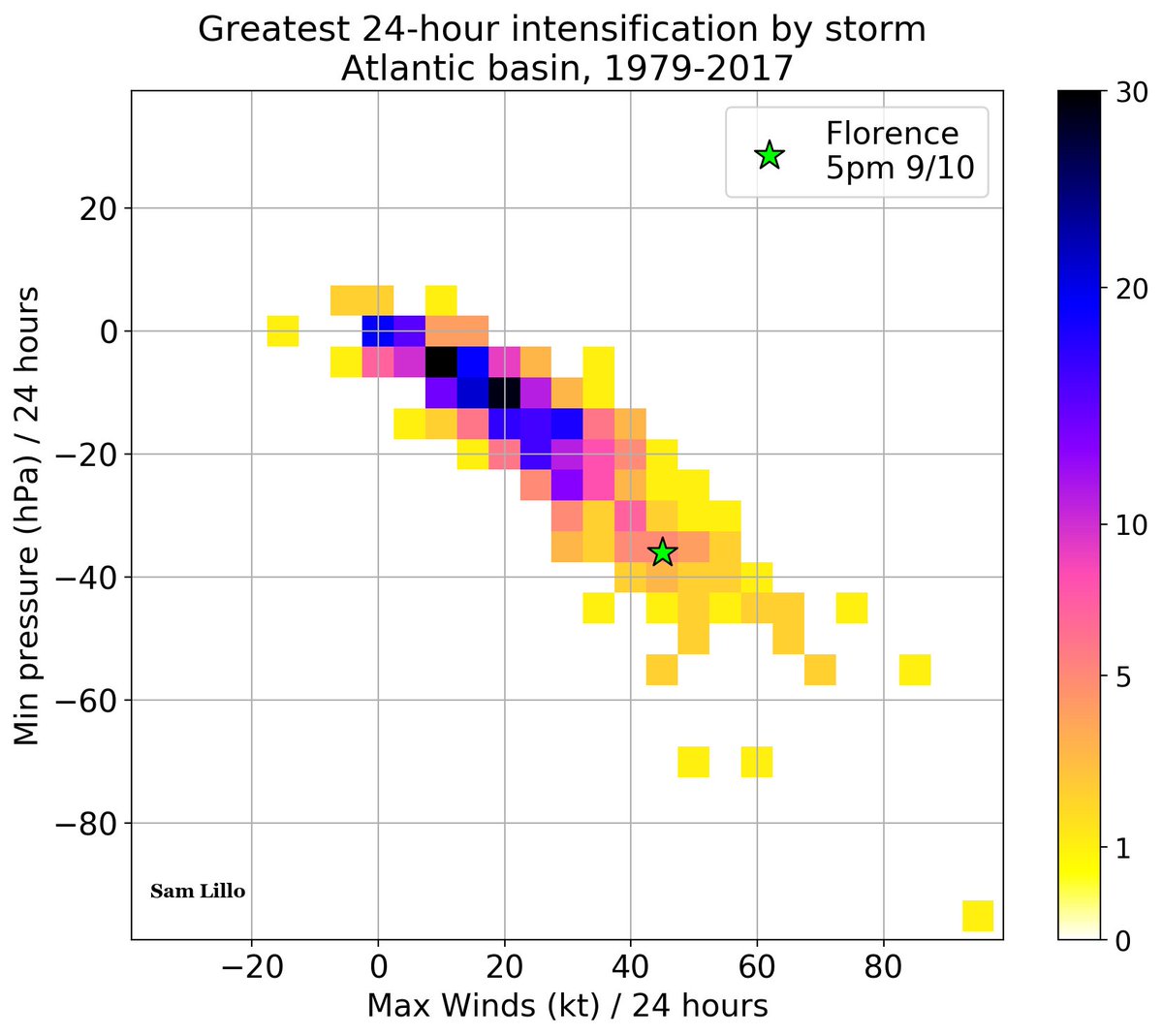 Secondary wind maxima beginning to become apparent in Air Force reconnaissance data flying in #Florence. This pairs well with microwave imagery that indicates an eyewall replacement cycle is in the works. This has resulted in a pause in strengthening, but it won’t last long. 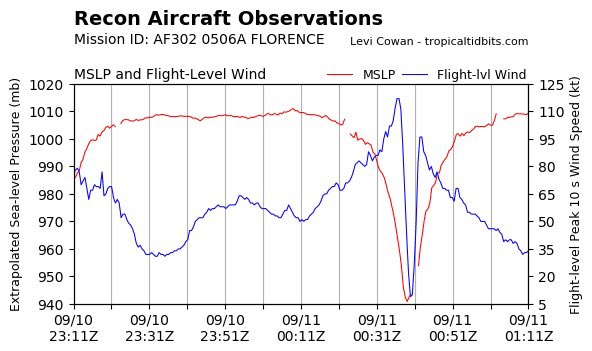 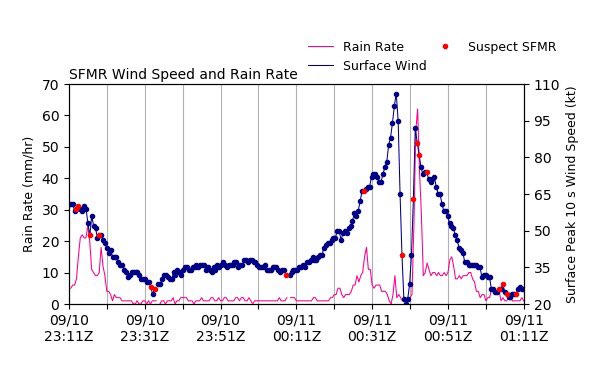 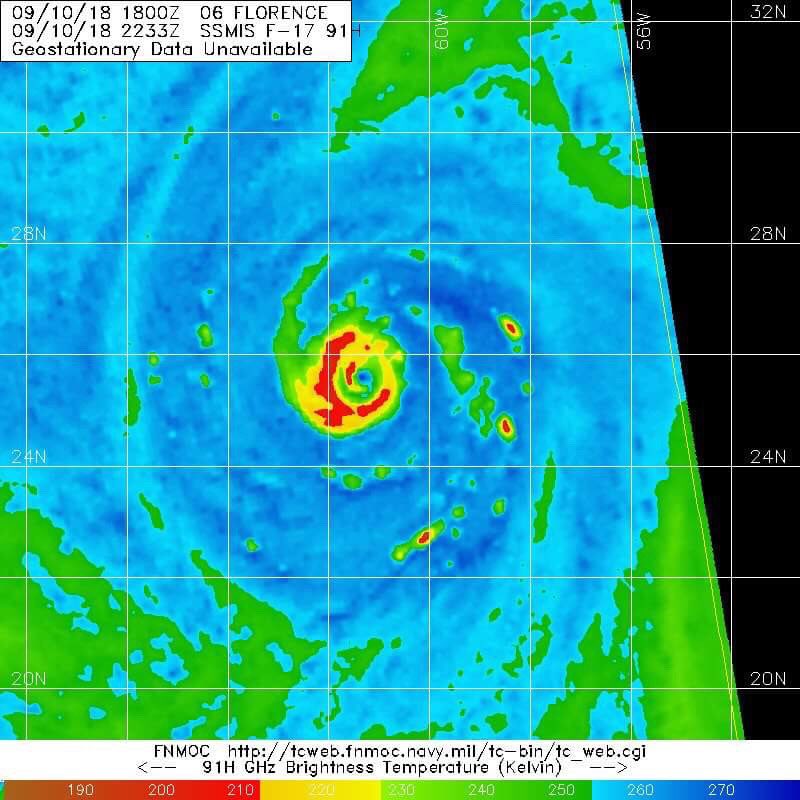 The 18Z Monday Hurricane models do not eject #HurricaneFlorence into the Northeast. 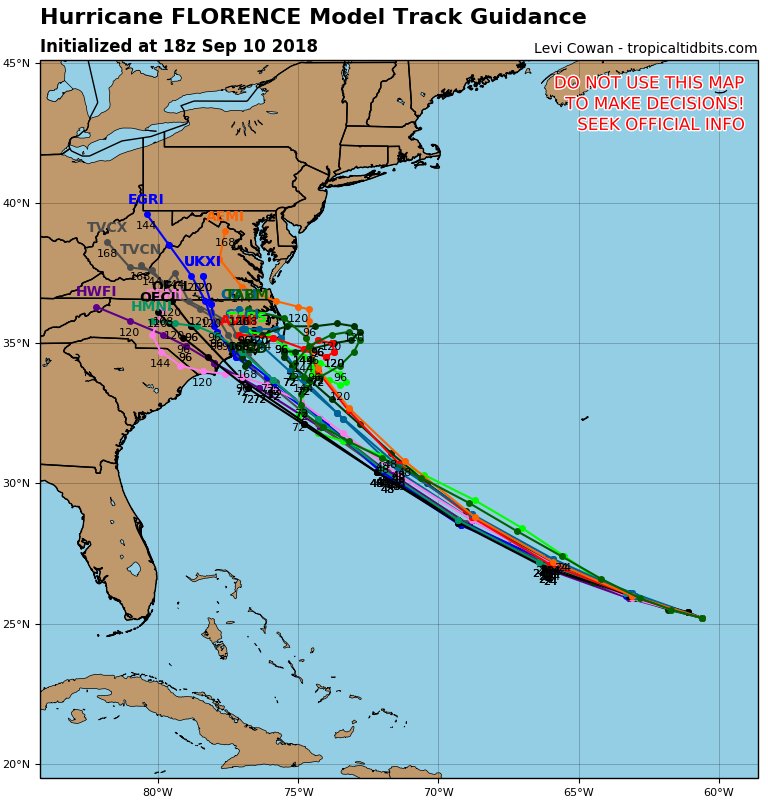 Bulk of ECMWF EPS members still indicate an fairly wide array of potential landfall scenarios on Thursday, somewhere along the coastal Southeast… But note there is still a (LOW) chance that the storm spins off the coast of Cape Hatteras, NC. Track forecast remains unfocused. 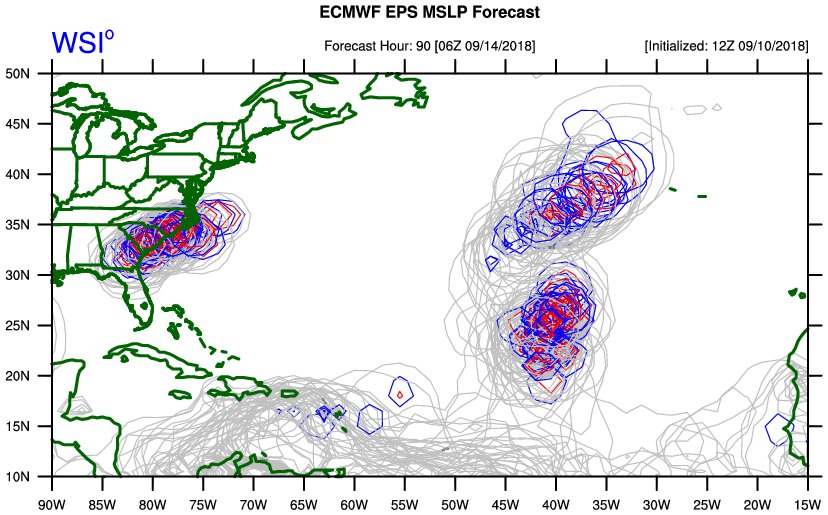 Yet another wrinkle with the 18Z MON GFS stalling CAT 5 at around 910 millibars #HurricaneFlorence off the Outer Banks this coming weekend, then ejecting the thing northeast devastating the entire Northeast Corridor early next week. Again, God I pray that this model is in error. 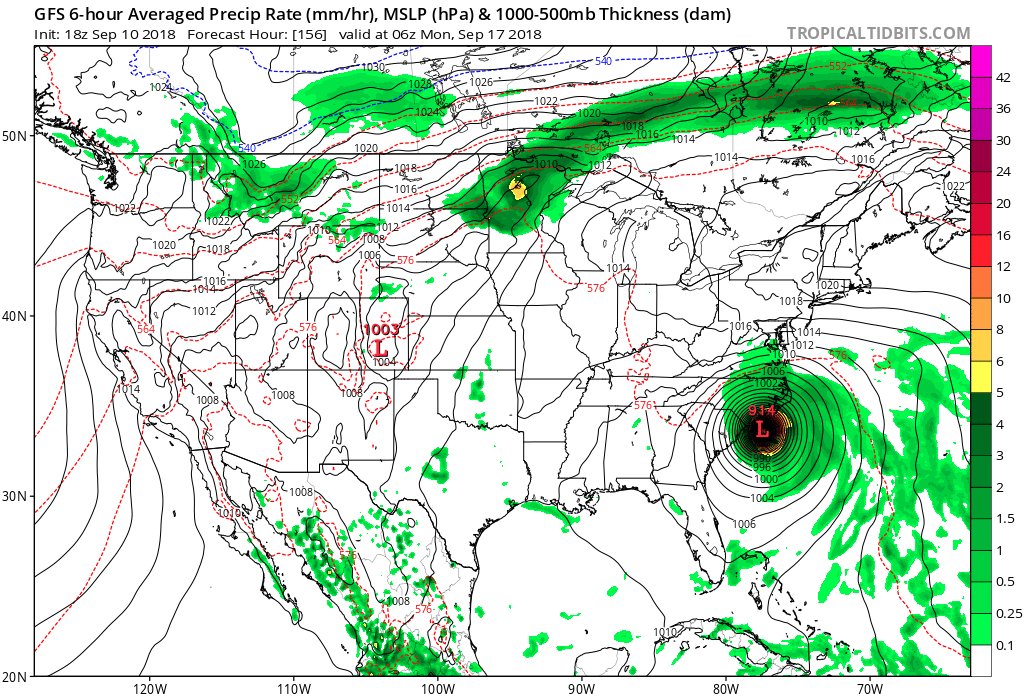 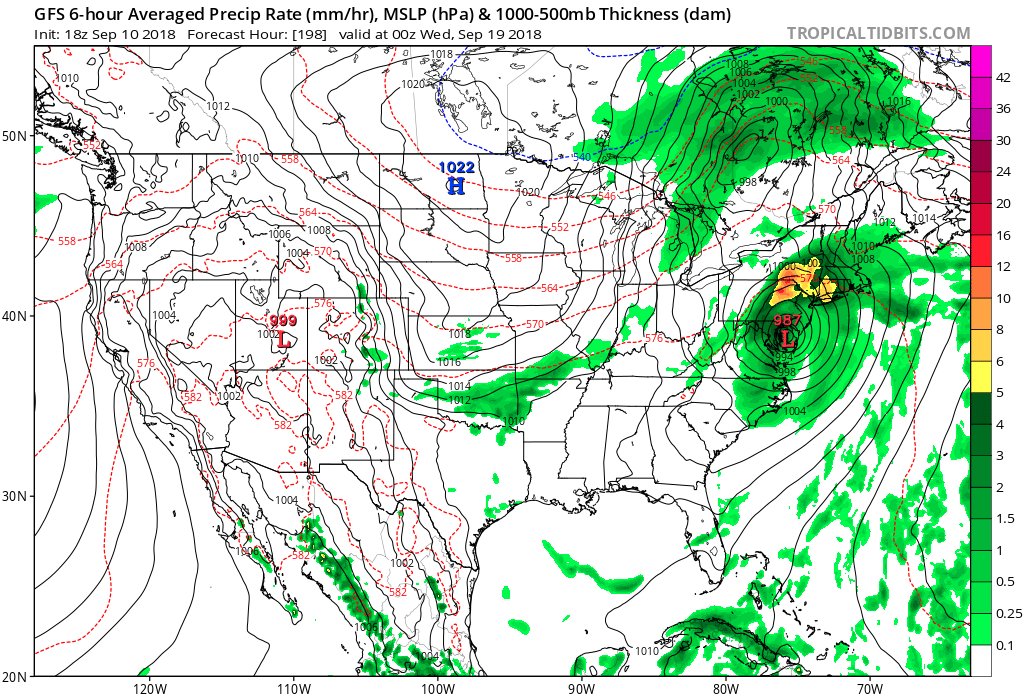 Information coming in after the 12Z Monday models from 9/10/2018 were processed:

This is the new experimental version GFS model called FV3-GFS 10 day forecast 12 pm EST. High pressure building off Africa initial steers Florence to the WNW. A strong high pressure ridge coming off the N East coast dips down behind Florence from a low pressure trough in the 👇👇 pic.twitter.com/LZ4rgy6ptw

Monday 5pm – #Florence track bumped slightly north but still three days out.  Don’t focus on the line and prepare for the worst, but hope for the best. 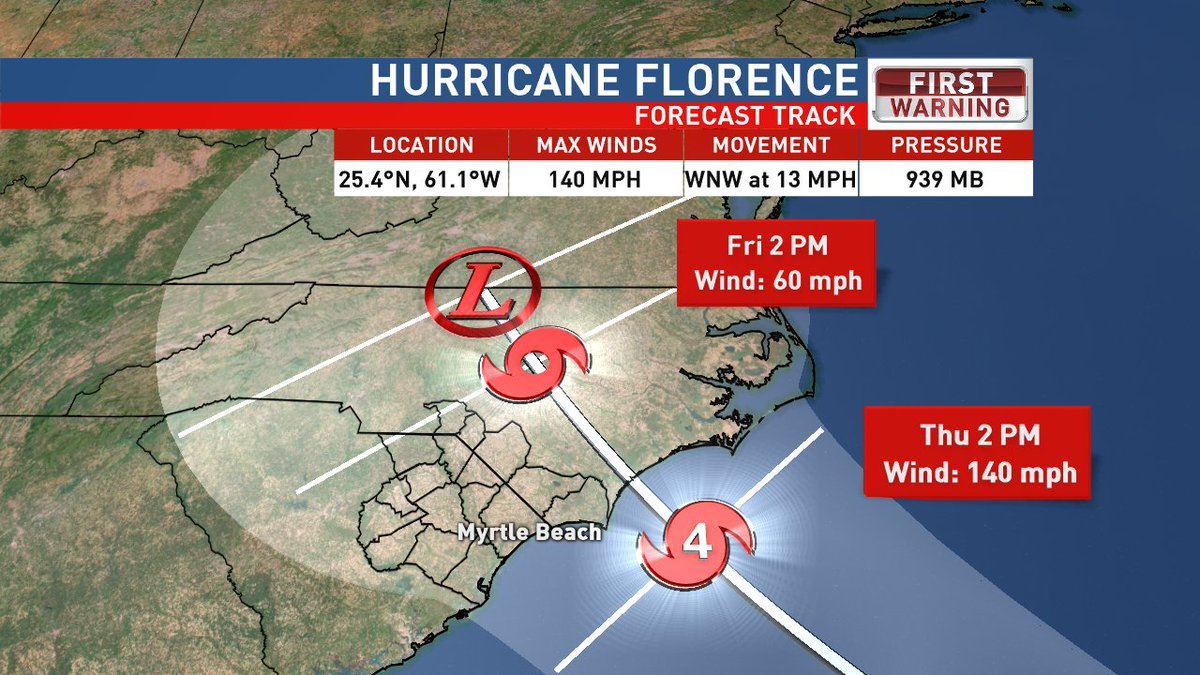 Hurricane Florence continues to increase in strength, size, and forward speed. Max winds now 140 mph moving to the west-northwest at 13 mph. Additional strengthening is expected and Florence could approach Category 5 status during the next day or two. 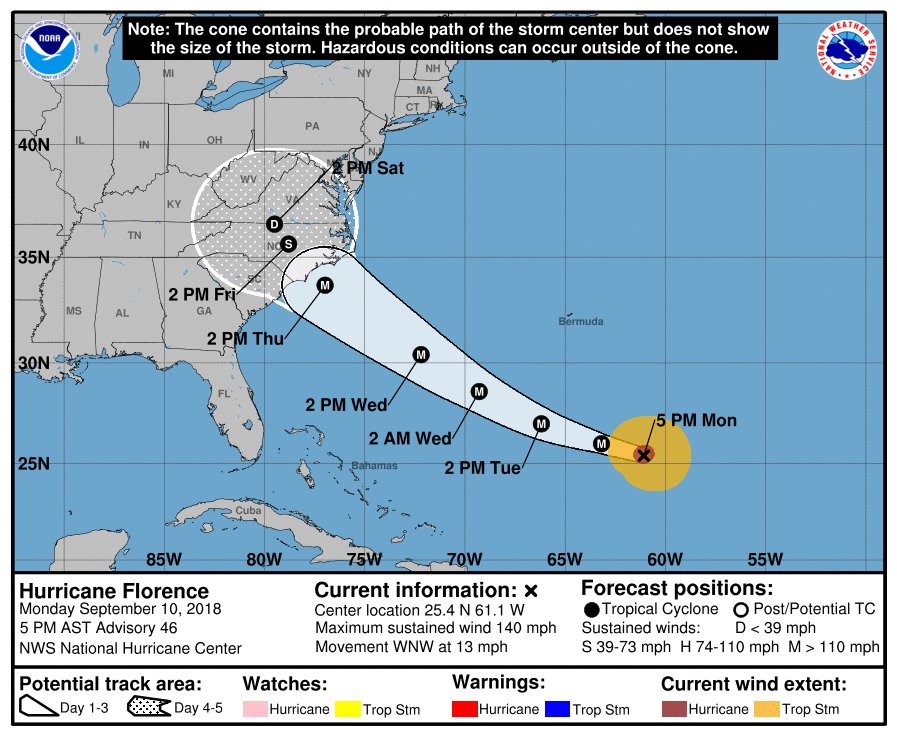 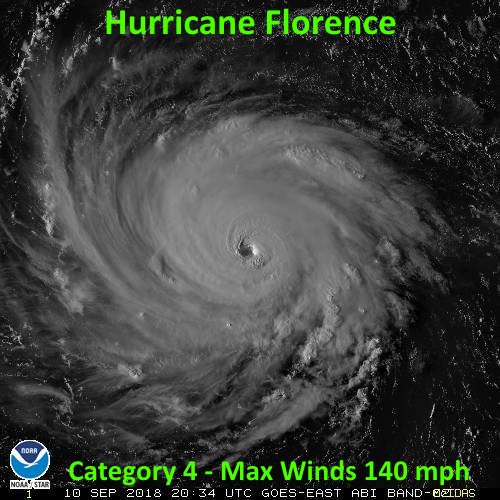 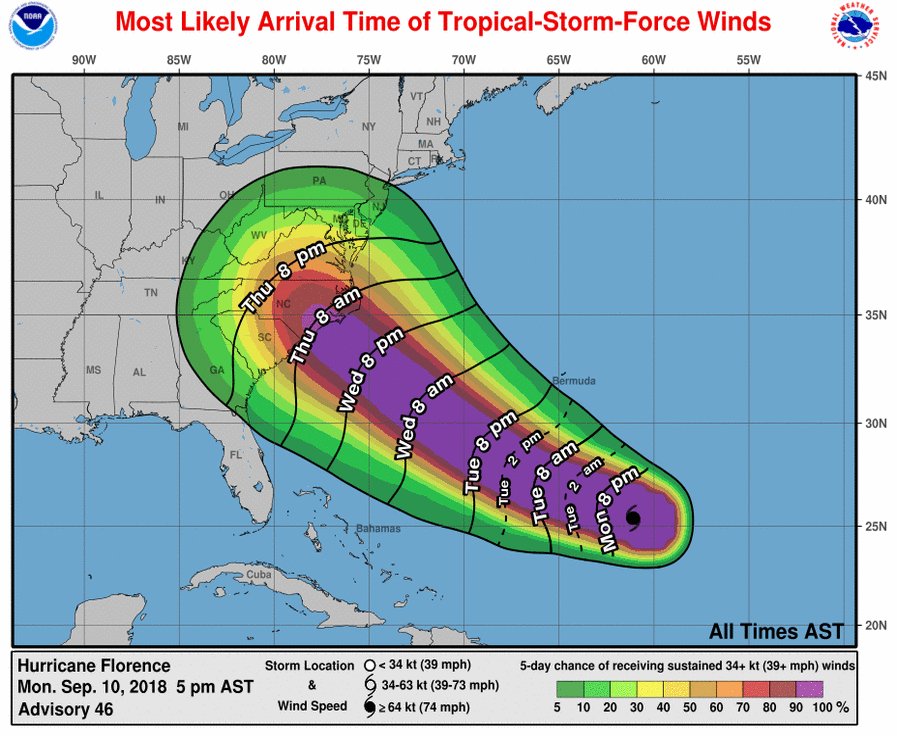 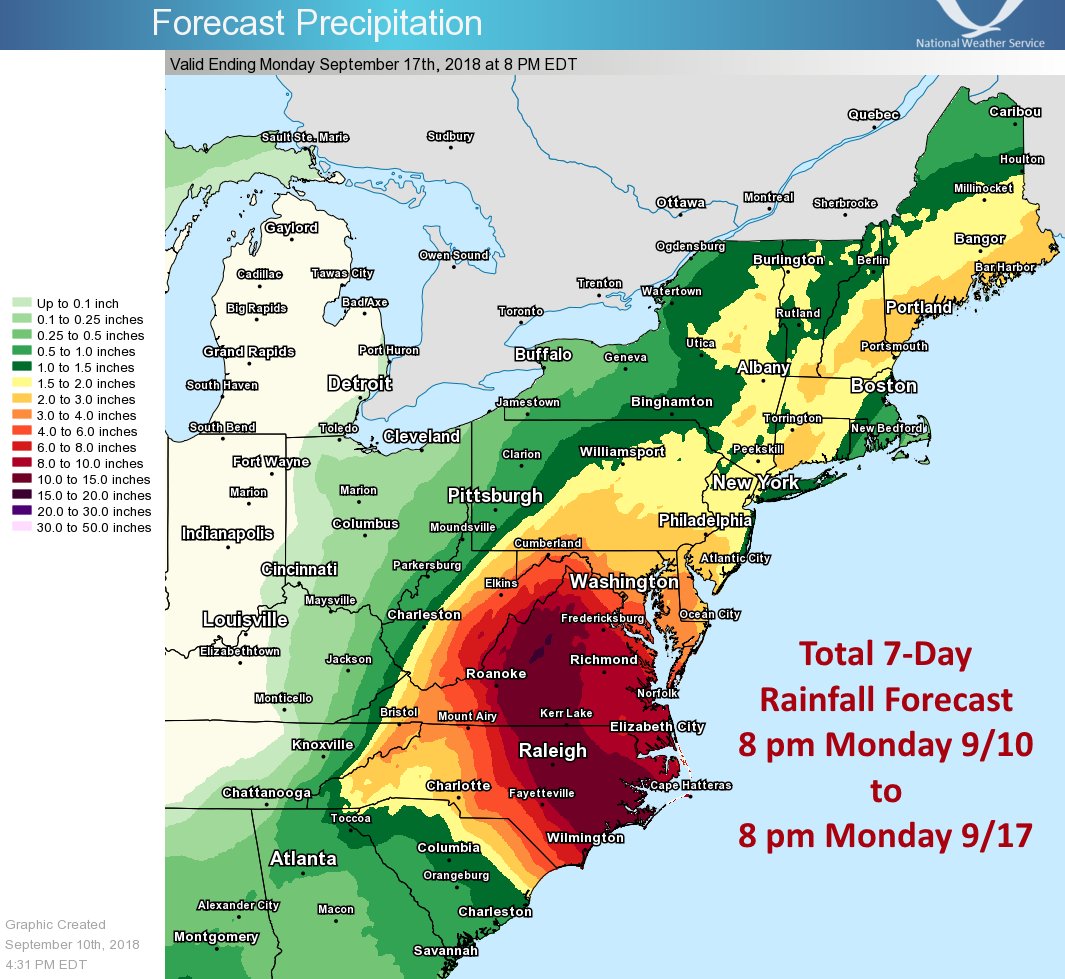 #Florence is getting super-charged by near record-warm 5C/9F extratropical North Atlantic ocean surface  temperatures (https://www.nesdis.noaa.gov/content/warm-sea-surface-temperatures-western-north-atlantic …). Keep in mind that even a modest 1C global warming trend can increase the likelihood of this sort of ‘ocean heat wave’ ten fold or more.

Satellite pics of #hurricane #Florence are now being taken every 30 seconds. This incredibly high resolution lets us peer into the storm's inner core &see features known as mesovorticies spiral around the eye, plus gravity waves from intense eyewall storms https://t.co/qrwHNihXMZ pic.twitter.com/hICxWIj6ww

As I tweeted with Harvey last year….It is IMPORTANT to understand the potential 1-2 punch from #HurricaneFlorence. The full brunt of major hurricane (Cat 4 or so) THEN perhaps 30 to 40 inches of rainfall if the storm stalls. I found that people struggle with the part 2. 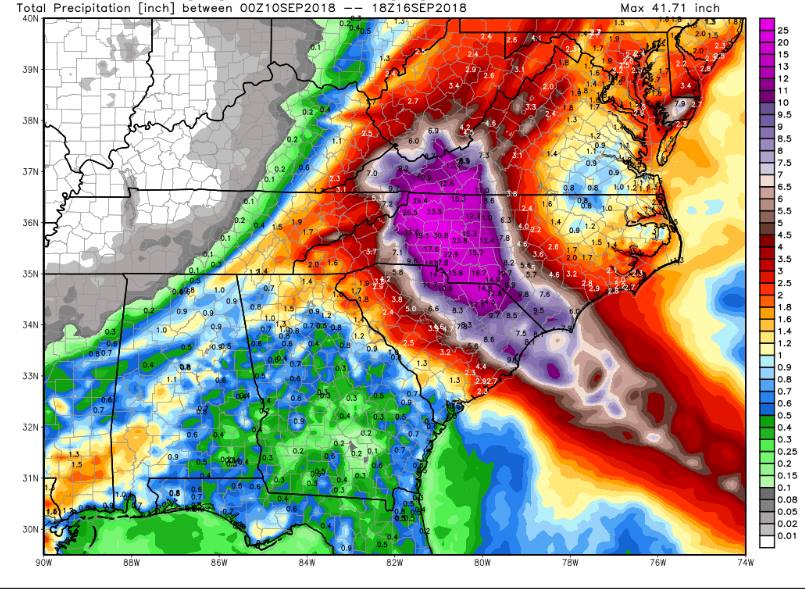 One in five South Carolinians have now been told they must evacuate their homes–the entire coast is on the move
https://www.postandcourier.com/news/evacuations-ordered-for-sc-coast-as-hurricane-florence-nears-effective/article_ecae59d2-b507-11e8-b430-c30c881683a8.html
1:10 PM – 10 Sep 2018

Monday afternoon’s #Florence track guidance: a nudge northward, but within the noise/error window. Possibility of a stall over NC for several days still exists too. All intensity guidance suggests a catastrophic Category 4-5 landfall, which if it hits NC, would be unprecedented. 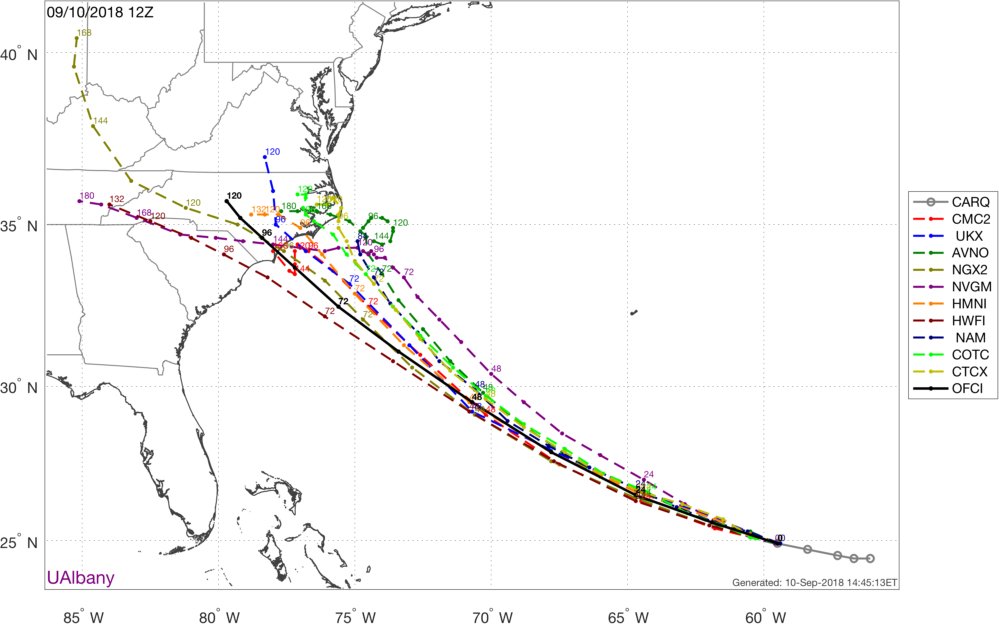 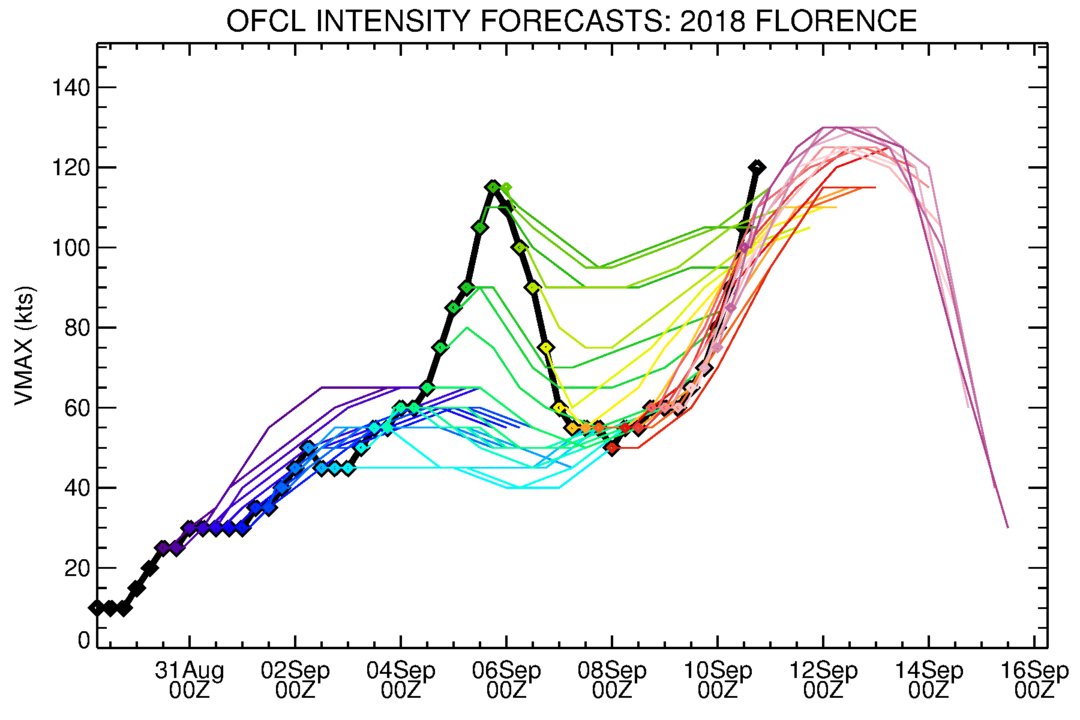 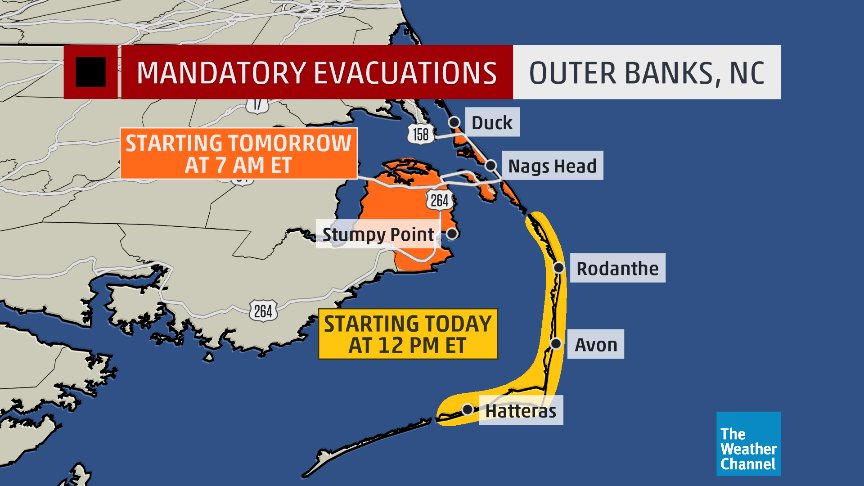 If #Florence reaches category five strength (157 mph or stronger), it will be doing so in rare territory. No category five storm has been recorded in the area of its path. 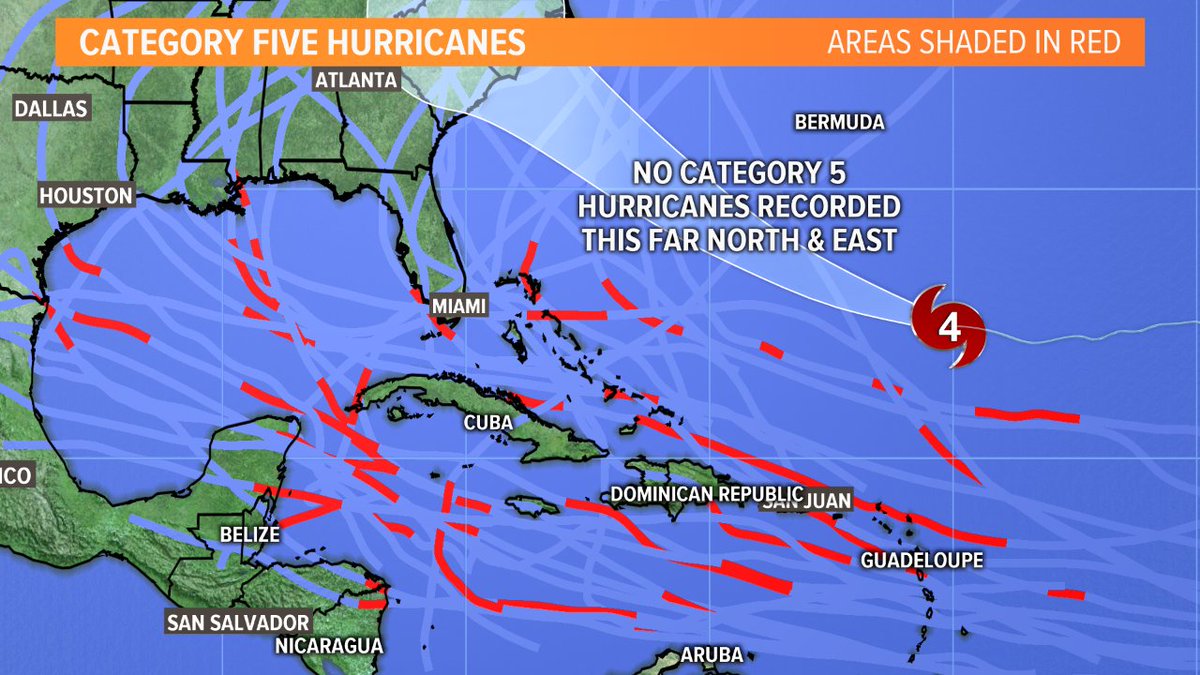 Among the many concerns regarding the coastal & inland flood component of #Florence is the dramatic lessening in the number of active NFIP policies across inland counties away from the coastline.

Translation: A hefty % of hypothetical flood damage could be uninsured. 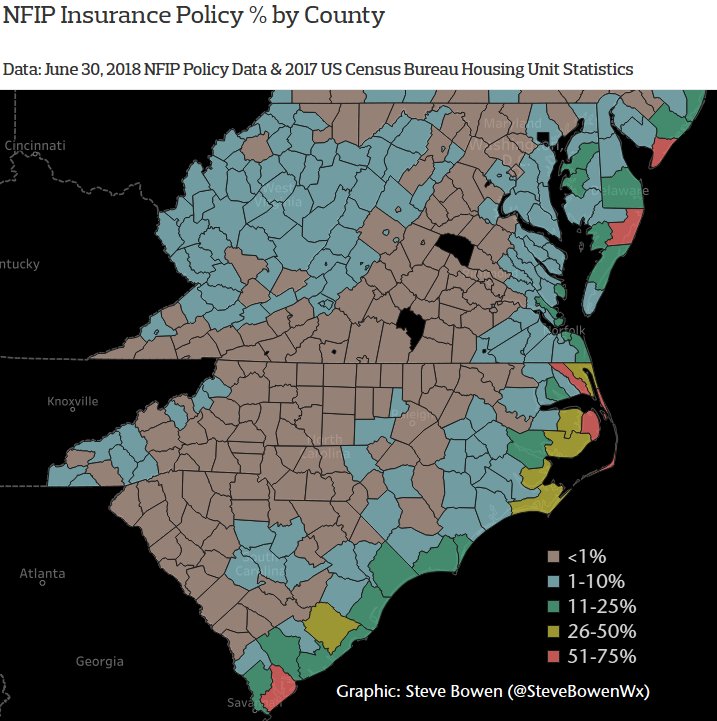 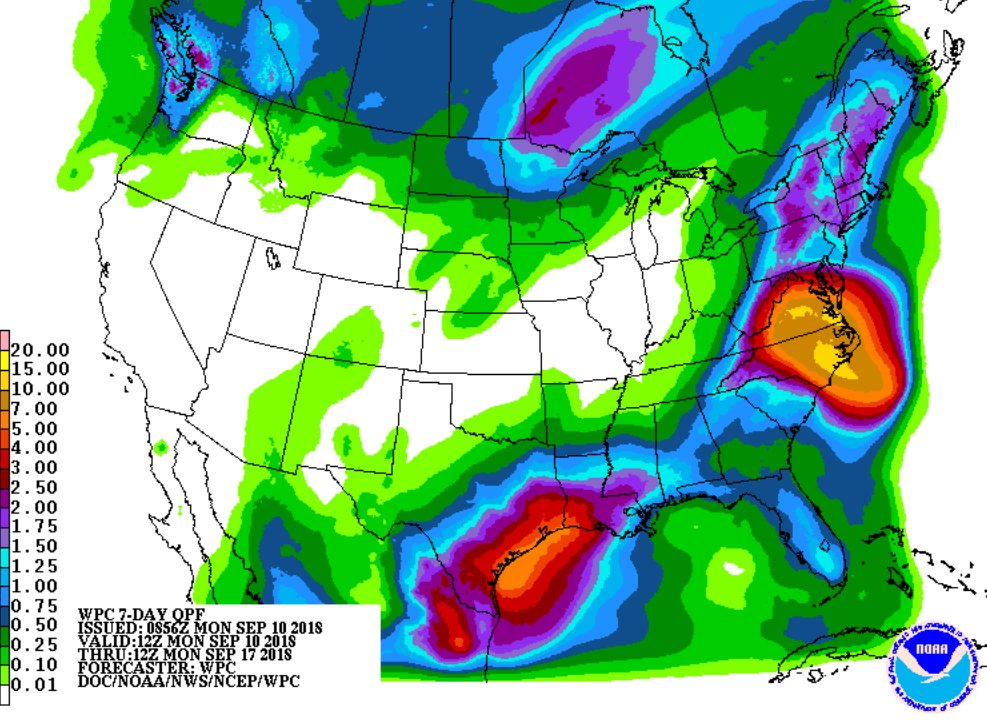 The European model as of 12Z MON remains consistent with itself. I think that this morning’s operational GFS (and thankfully) is an outlier with #HurricaneFlorence. The system does not stall along the coast on this EURO run. 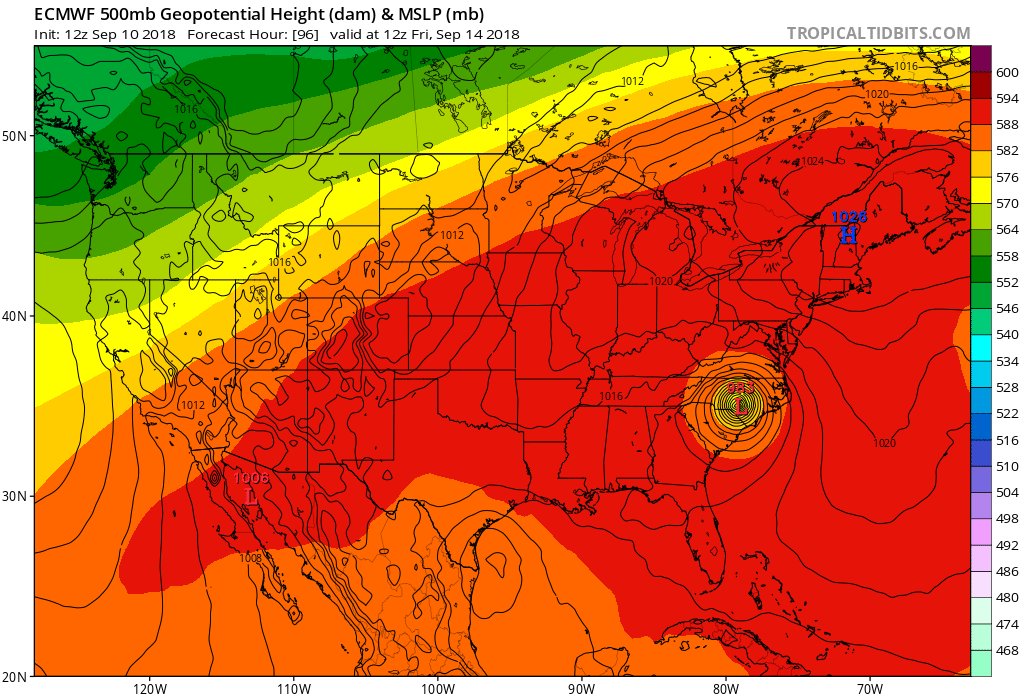 Based on current forecasts, #Florence could produce the highest storm surge on record in the Carolinas: 15 to 20 feet quite possible. https://bit.ly/2QhsuER 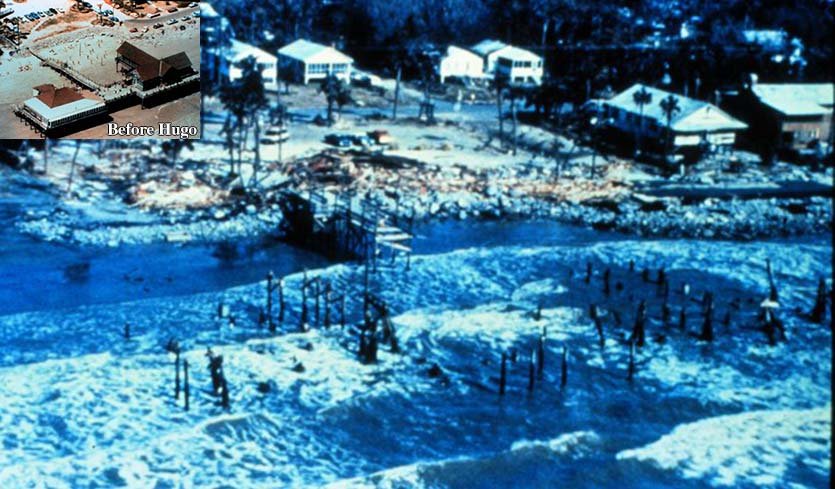 Big new wrinkle with the 12Z MON GFS stalling CAT 5 #HurricaneFlorence off the Outer Banks this coming weekend then bulldozing the thing due west through the heart of North Carolina. God I pray that this model is in error. 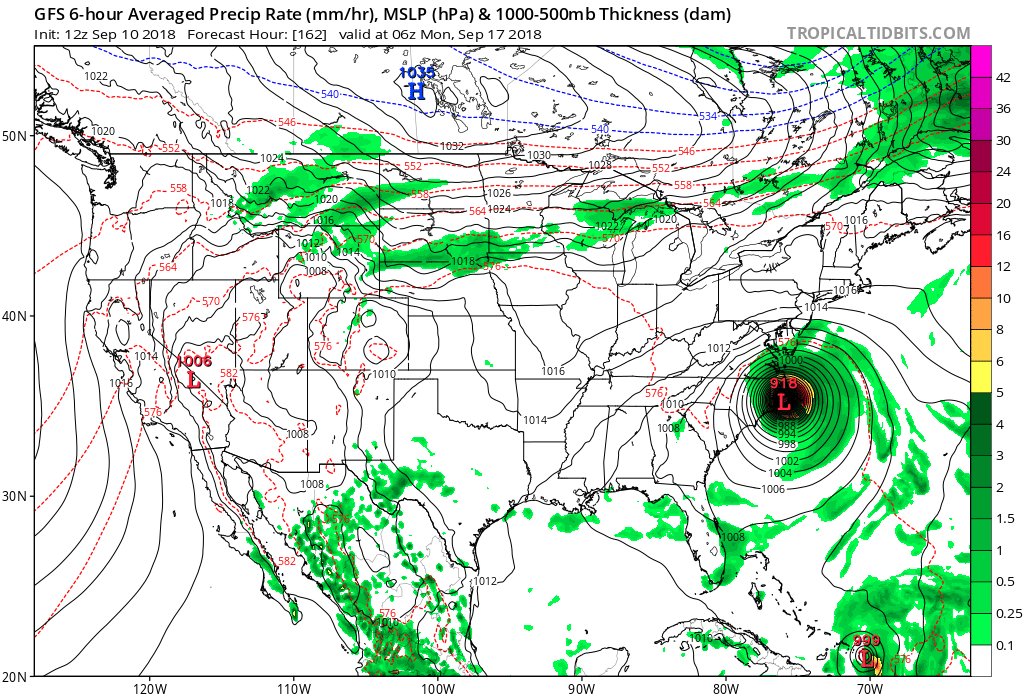 Wow…Per latest recon dropsonde: Winds just 1000 ft above the surface in the NE eyewall are at 175 mph.

Exposure change in region forecast to be affected by #Florence.  1,325% increase in the number of homes within the cone of uncertainty.  While much of the development has been along the coast, most is inland and subject to flooding. The water that kills, not the wind. #HaveAPlan 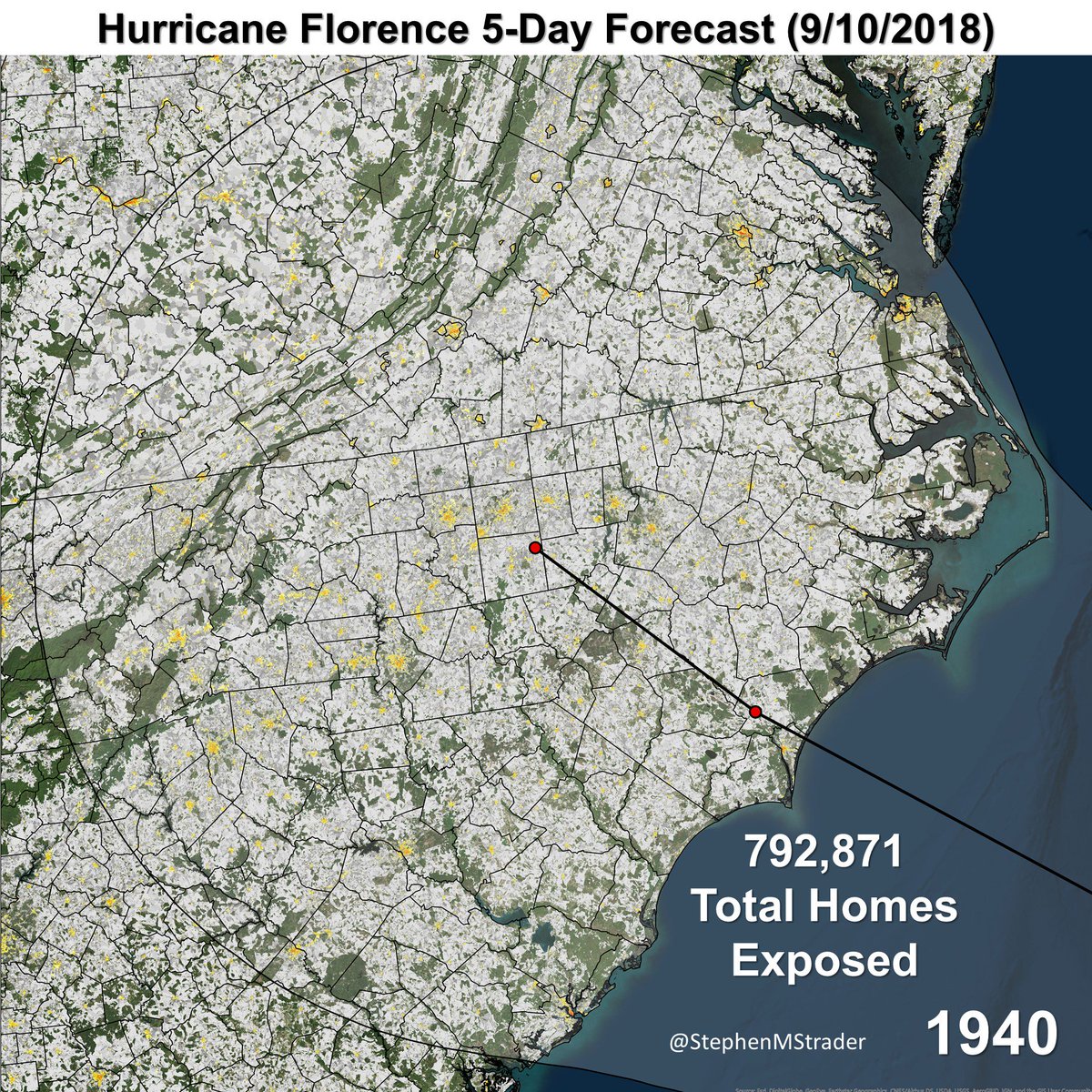 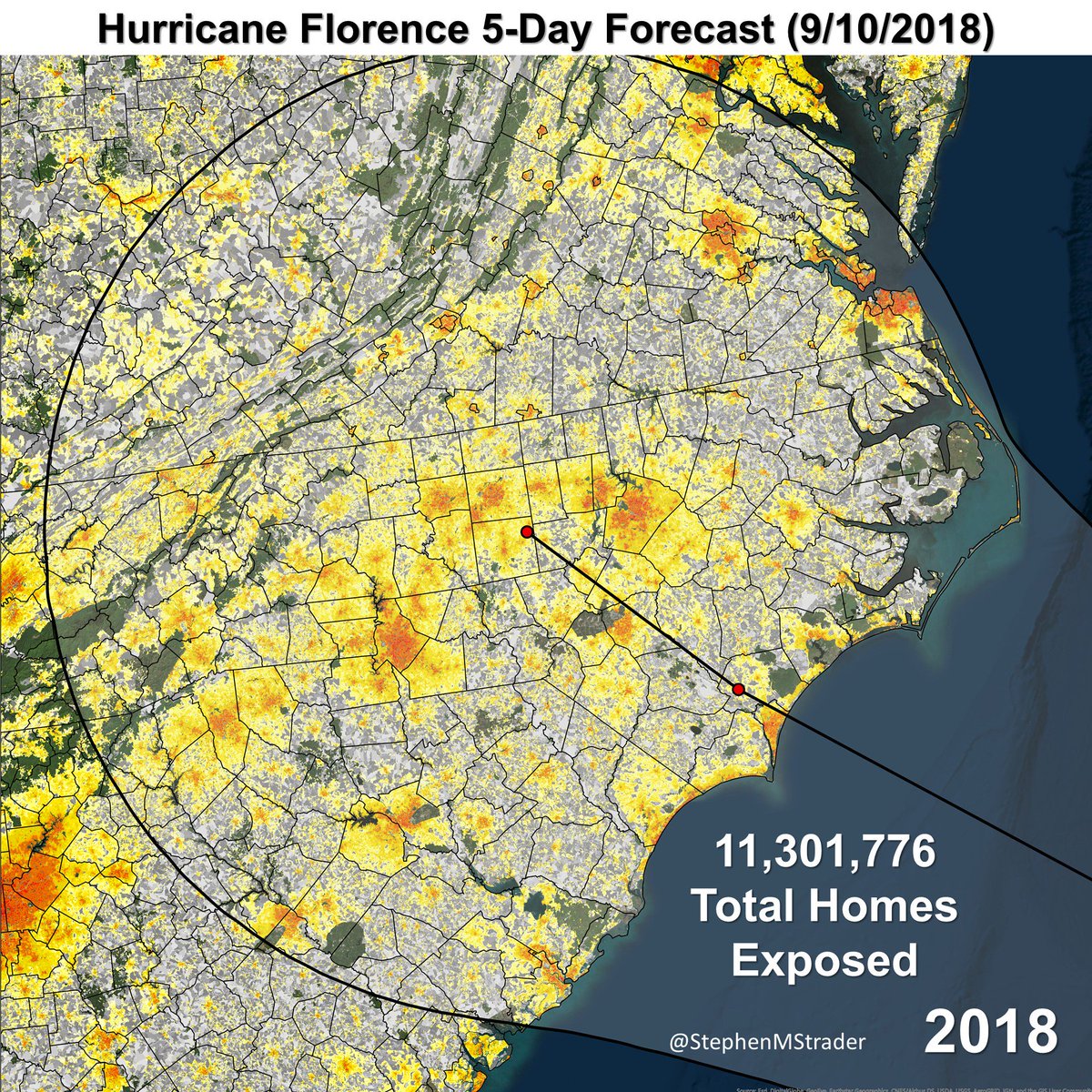 I continue to believe tremendous flooding is going to be major issue w/#HurricaneFlorence, particularly with elevated terrain inland in Carolinas..yet I, multi-degreed meteorologist/former AMS President, was called a fear monger by someone on Twitter yesterday for saying that SMH

#Hurricane #Florence is now a Category 4 hurricane. It has intensified by 40 mph in the past 13 hours. The last Atlantic hurricane to intensify as rapidly as far north as Florence's current location is Hurricane Humberto (2007). pic.twitter.com/gVm2PbOYSz

The pressure at the center of #HurricaneFlorence dropped 40 millibars in the last 24 hours. That’s…a lot, very fast. Now is the time for those of us outside the danger area to be marshaling the resources and aid people in the Carolinas are going to require 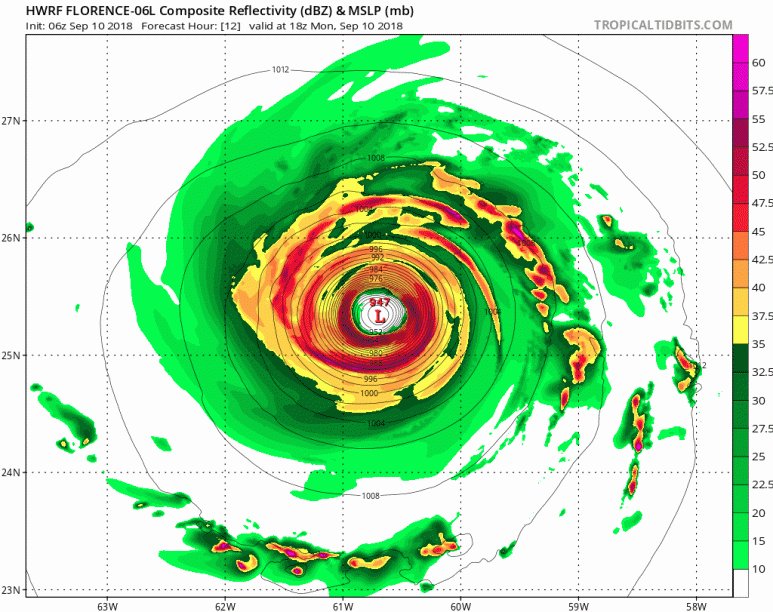 Information coming in after the 06Z Monday models from 9/10/2018 were processed:

Models are coming into better agreement. 06Z MON GFS tracks cat 4 #Florence was very similar to that of the 00Z GFS devastating  eastern North Carolina and SE Virginia, then stalling inland. Also, this run we have the #Harvey scenario of extreme #flooding at RDU up through ORF. 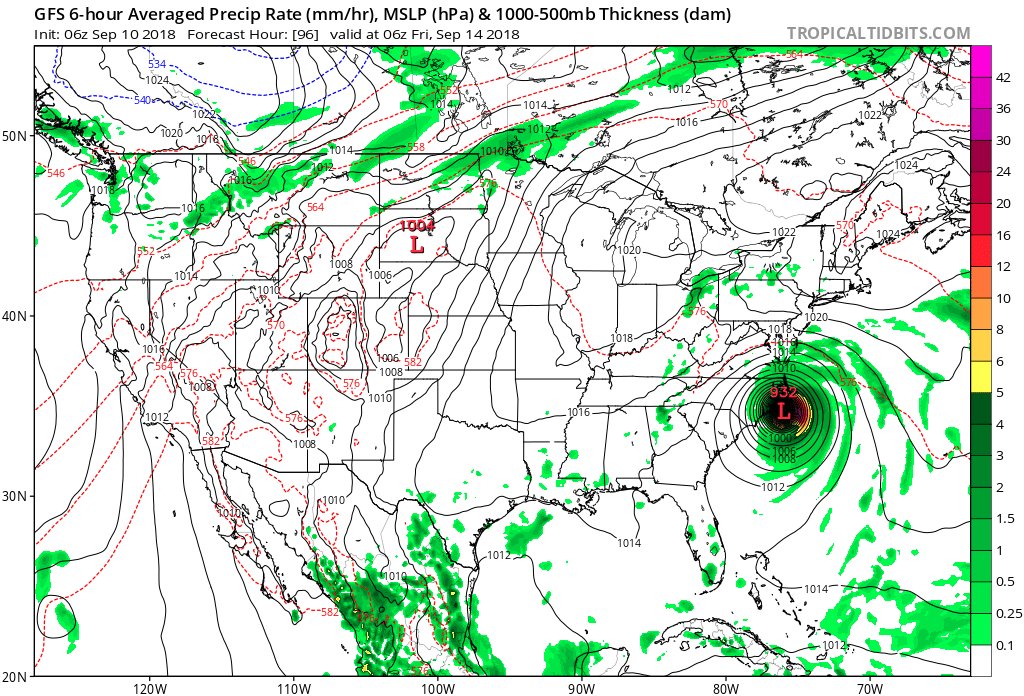 Hurricane Florence GFS model 10 day forecast 6 am EST. High pressure building off Africa initial steers Florence to the WNW. A strong high pressure ridge coming off the N East coast dips down behind Florence from a low pressure trough in the E Central Atlantic and👇👇 pic.twitter.com/YpNdHQiknc

Since 1851, only one #hurricane has brought sustained Category 4 winds (>= 130 mph) to North Carolina: Hurricane Hazel in 1954. #Florence #FlorenceNC https://t.co/oufzrjQgx6 pic.twitter.com/3Y37uDniIS

It is honestly getting hard to keep track of everything in the tropics right now. In addition to #Florence, #Helene, & #Issac, the system in the NW Caribbean is getting better organized today.

NHC is giving it a 40% chance of #TC genesis in the #GoM later this week. pic.twitter.com/a1N5WPbbn4