Saturday July 21st… Dear Diary. The main purpose of this ongoing post will be to track United States extreme or record temperatures related to climate change. Any reports I see of ETs will be listed below the main topic of the day. I’ll refer to extreme or record temperatures as ETs (not extraterrestrials)😊. Here is today’s main climate change post related hot topic:

More and more in these days of near record average global warmth I see weather patterns at 500 millibars that I’ve never seen before during my 31 years at The Weather Channel from 1983-2014. The pattern this week into the next, though, is making my jaw drop for its shear ridiculous look for July. Here is what I saw this morning forecast for tomorrow morning:

Extreme warmth is occurring at 500 millibars from Alaska through most of Canada. A spring like cold closed low, which is the same system that brought severe weather to the Midwest, sits over much of the East. Apparently Dr. Daniel Swain’s Dipole pattern has redeveloped over North America looking at the western ridge. We may see more cool record “ET” reports into early next week from the cool eastern system. We’ll see many more ET records from the large heat dome sitting over the southern Plains, which will slowly move westward towards California next week.

One sign of global warming is the breakdown and warming of the polar vortex, which Dr. Michael Mann has described for the winter. I believe that the same change in dynamics can apply to the summer, as well, which he is working on:

A big sign of the breakdown of the typical polar vortex signature are numerous closed lows appearing on charts at 500 millibars. This weather pattern has that in spades.

We will see another eye popping ridge redeveloping over Scandinavia and northern Russia by Friday of next week. I’m sure that by the end of next week we will see astounding reports of record heat from this area. Note systems undercutting the ridge moving through Europe:

Here is a view of Asia valid for Friday:

Note the numerous closed lows squeezed in between strong ridges…a sure sign that something isn’t quite “right” with the atmosphere. These closed lows can squeeze out a lot of moisture producing flooding due to their slow moving, blocked nature…yet another sign of climate change.

It’s day four of a historic but localized heat wave that has been plaguing the south-central U.S. Here is the current state of heat advisories and warnings:

Some of the heat has broken in Oklahoma and Arkansas. As expected for over a week yet another episode of extremely dangerous heat should occur in California:

A long duration heat wave with record-breaking temperatures is possible next week for much of southwestern California. There is the potential for high heat risk mainly for interior locations including the valleys and mountains Monday through at least Thursday. #cawx #LAWeather 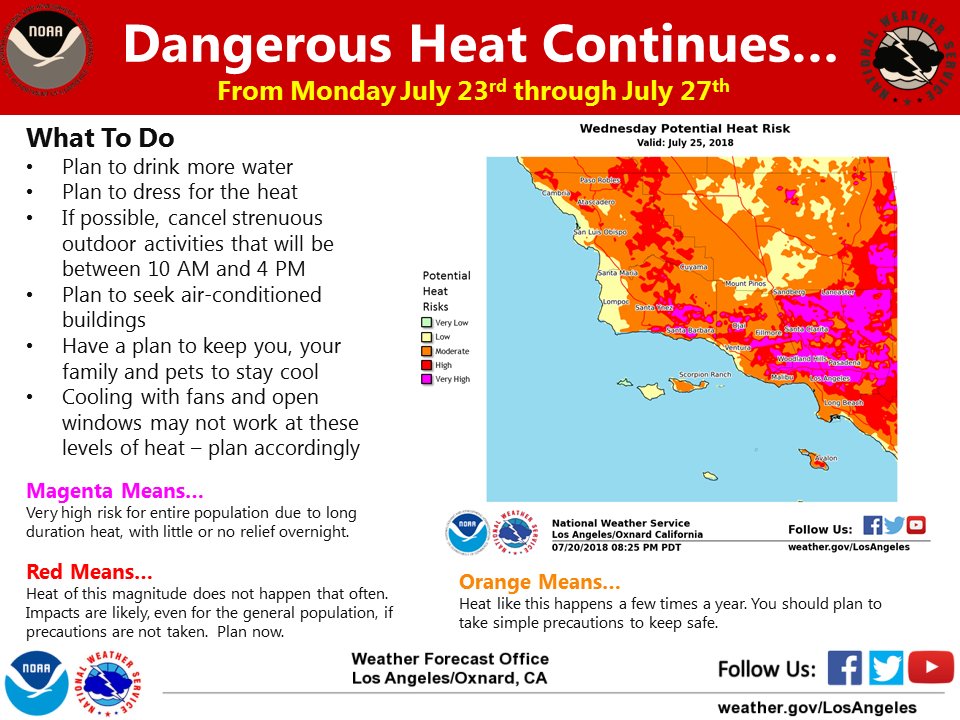 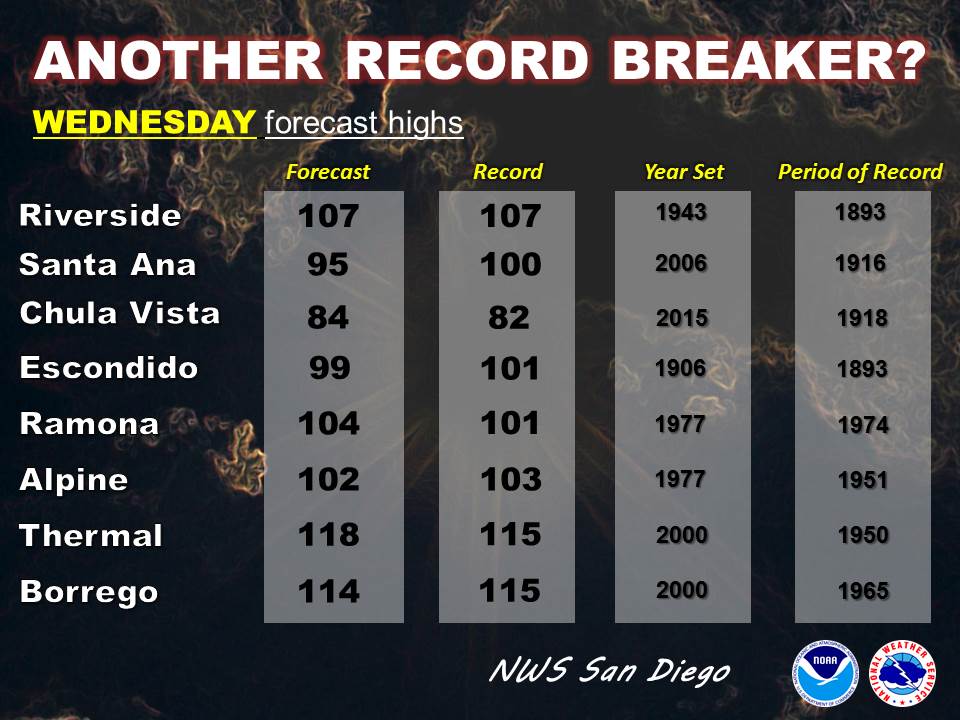 7/21: Here’s a look at the 1 PM temperatures along with the expected high temperatures for today. Visit http://weather.gov/safety/heat  for heat safety tips. 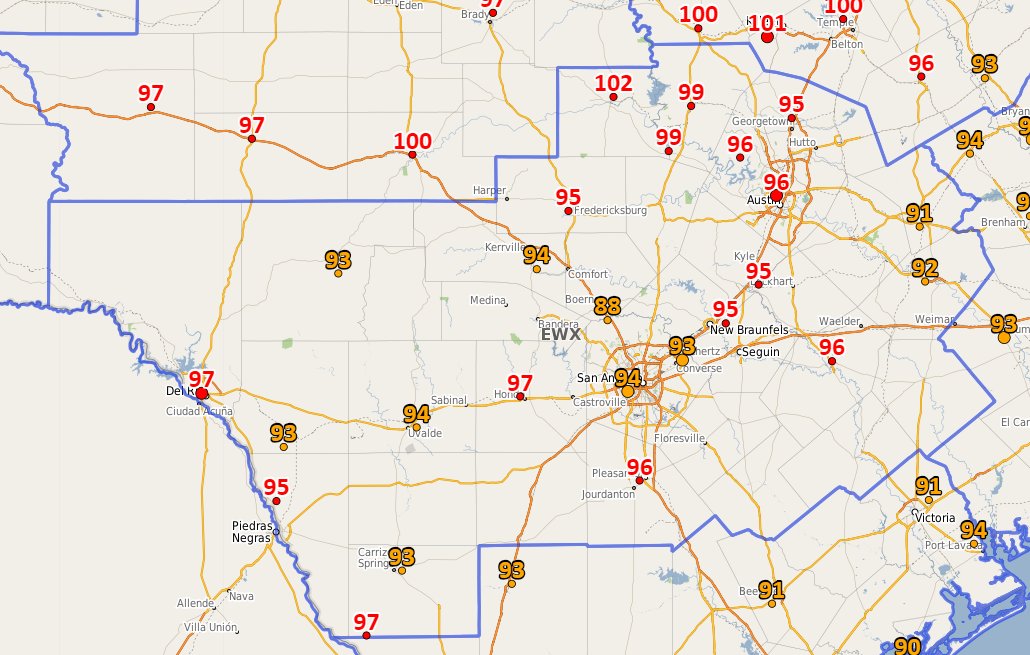 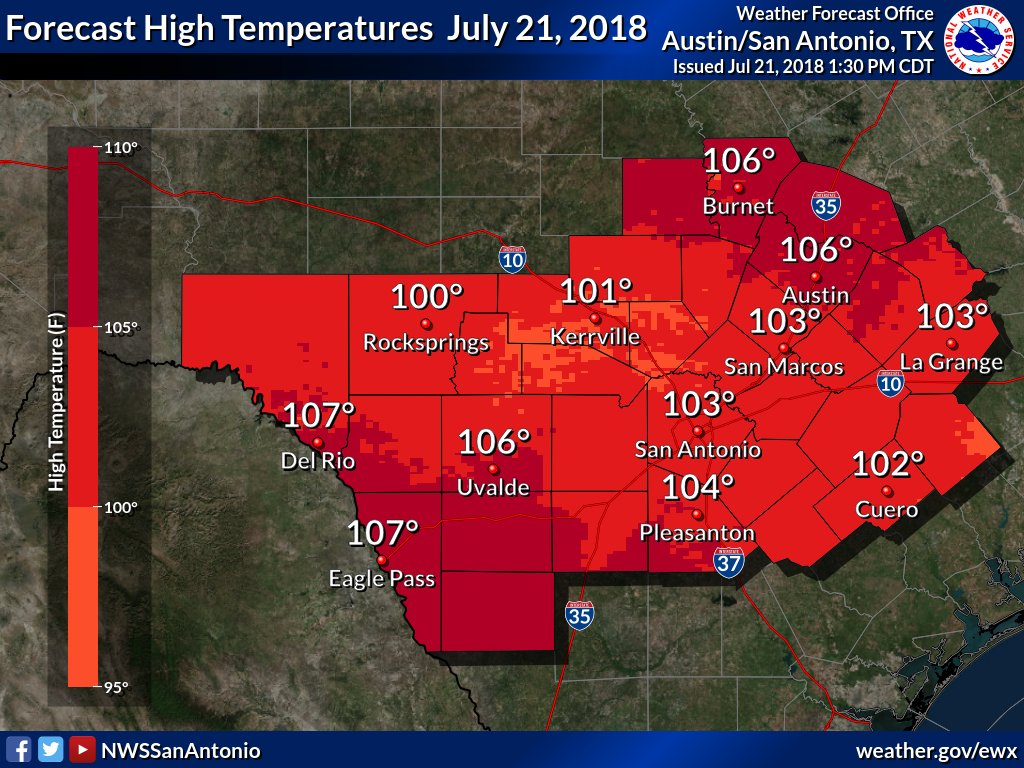 More record heat today. Highs will soar to between 103-112 degrees! Air pollution in the DFW area & an elevated threat for grass fires will be other issues for us.  Current records: DFW 107 in 2012 and Waco 105 in 1974. #dfwwx #TexasHeat #ctxwx #texomawx 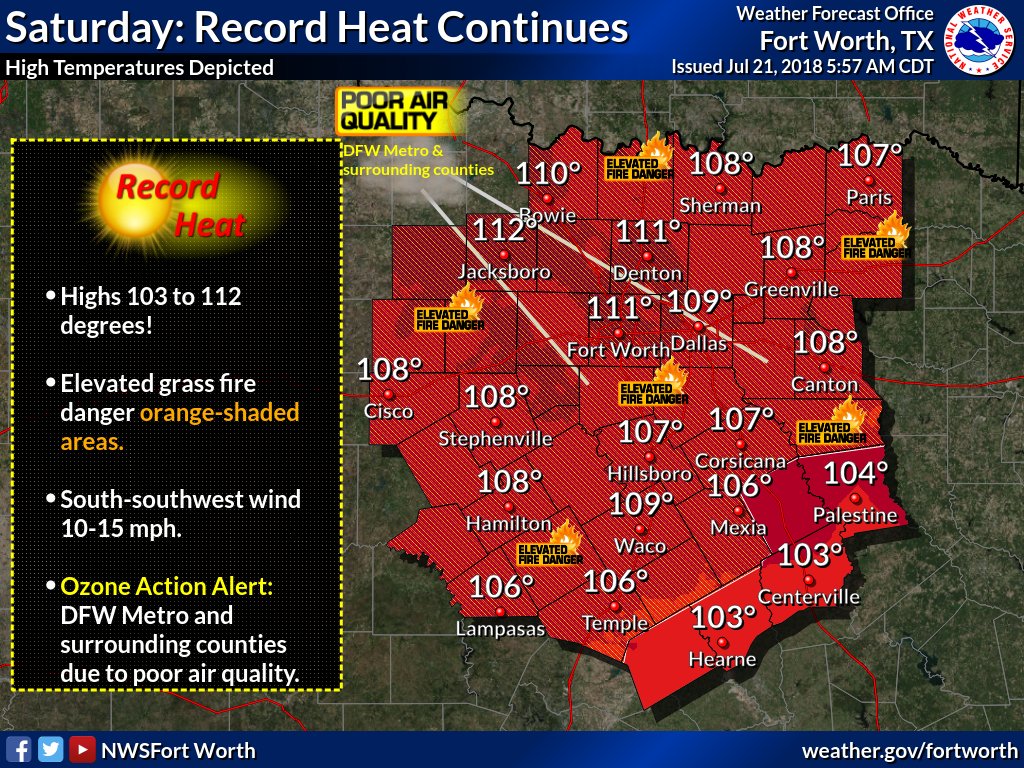 IT IS TOO HOT!! Expect heat indices to stay like this until we get to sunset… #Melting 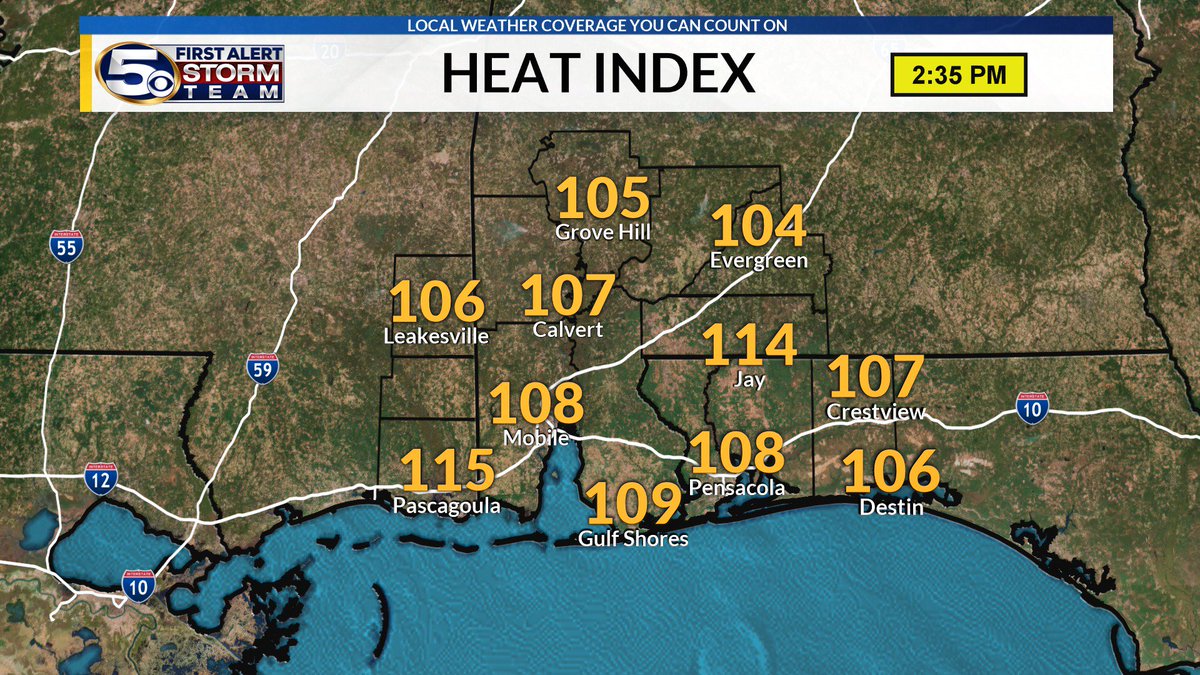 Webbers Falls with the worst heat index of the day… a whopping 123F!! 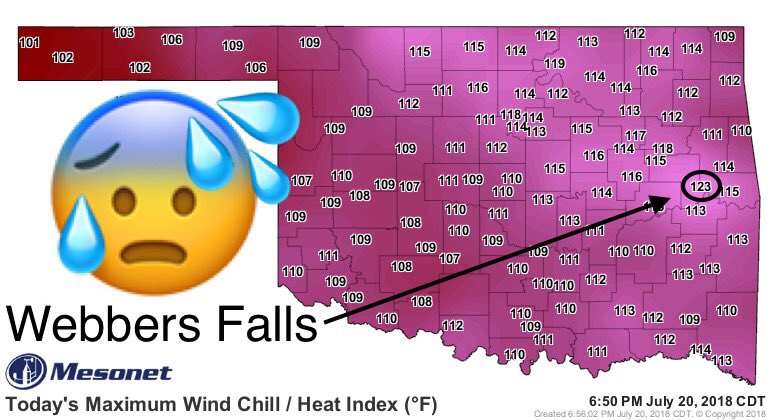 5:05 PM – 20 Jul 2018
Here is an interesting New York Times article confirming some of my research:
https://www.nytimes.com/interactive/2018/07/11/climate/summer-nights-warming-faster-than-days-dangerous.html
Here is a list of Saturday’s records from major reporting stations in Texas:

DFW is now up to 109 degrees for the high today. Hottest recorded temperature since August 3, 2011. #dfwwx #txwx

The heat is on! Here’s a few preliminary record highs that were set or tied today… #nmwx 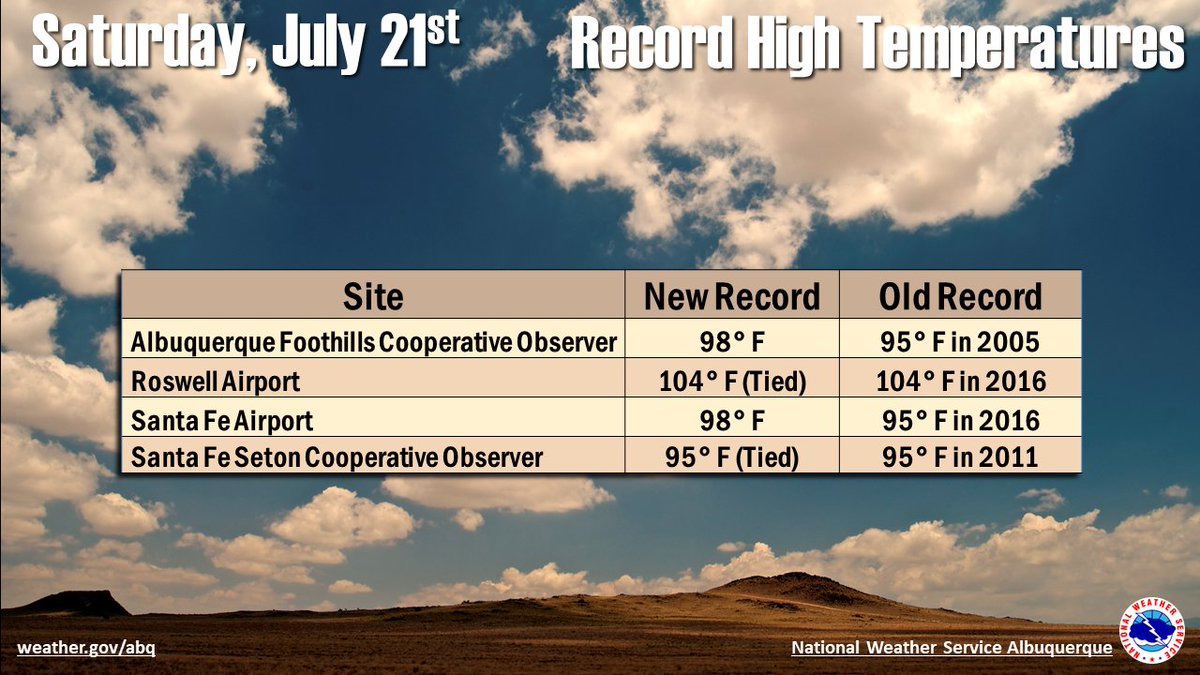 It was a hot one today.  Here are some select high temperatures from around the area.  They ranged from 101 to 111.  #dfwwx #txwx 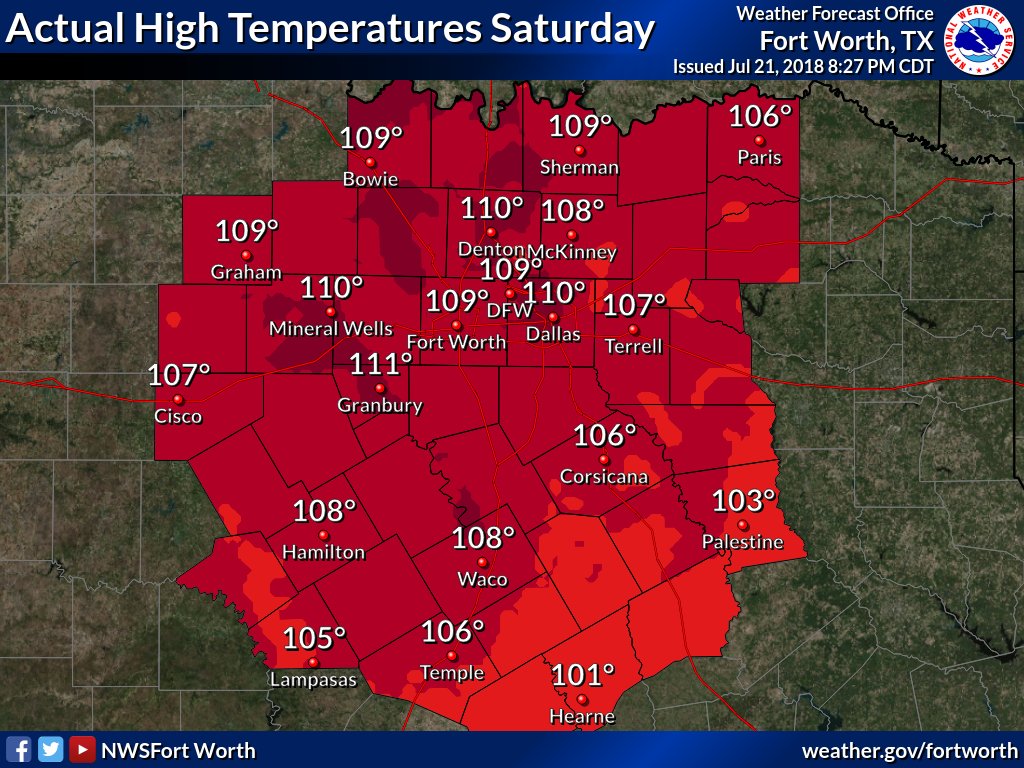 I’m going to link the unfortunate Duck Boat incident in which 17 people died with this write up by Jason Samenow and Matthew of the Washington Post and Matthew Cappucchi here for posterity: