Sunday April 15th… Dear Diary. The main purpose of this ongoing post will be to track United States extreme or record temperatures related to climate change. Any reports I see of ETs will be listed below the main topic of the day. I’ll refer to extreme or record temperatures as ETs (not extraterrestrials)😊. Here is today’s main climate change related topic:

Out There- Where No Climate Scientist Has Gone Before

If you watch a lot of science fiction sooner or later you will stumble upon a story in which not only the Earth is in peril for annihilation, but the entire universe, as well. Today I will frighten all reading using a thought experiment to speculate about the plausible true nature of the universe asking the question, is carbon based intelligent life doomed? The goal here is to spur people into action on the climate issue proving this sanctimonious writer wrong. What spurred me on to write today’s post was this Atlantic article by astrophysicist Adam Frank that I read this morning relating renowned NASA climate scientist’s Gavin Schmidt’s speculative exercise:

It only took five minutes for Gavin Schmidt to out-speculate me.

Schmidt is the director of NASA’s Goddard Institute for Space Studies (a.k.a. GISS) a world-class climate-science facility. One day last year, I came to GISS with a far-out proposal. In my work as an astrophysicist, I’d begun researching global warming from an “astrobiological perspective.” That meant asking whether any industrial civilization that rises on any planet will, through their own activity, trigger their own version of a climate shift. I was visiting GISS that day hoping to gain some climate science insights and, perhaps, collaborators. That’s how I ended up in Gavin’s office.

Just as I was revving up my pitch, Gavin stopped me in my tracks.

“Wait a second,” he said. “How do you know we’re the only time there’s been a civilization on our own planet?”

I’m going to stop there at the beginning of the article, which I would invite all to read to the end. Both Schmidt and Frank note that the chances for another civilization developing in the Earth’s far past is highly unlikely. The proof is just not there in the fossil record. What caught my eye was that Adam Frank, an astrophysicist by trade, had come up with the same train of thought on exocivilizations that this little old meteorologist had last year:

No, this post was not on early hominids developing a long lost civilization on Earth but on why it is not in man’s nature to deal with the climate crisis focused and head on. At the end of the piece I wrote:

“And finally, if you are reading this, Stephen Hawking, or from the grave, Carl Sagan, I would posit a thought no one that I know of has written, but does have cosmic ramifications. Yes, I am going “way out there” perhaps where no climate scientist has gone before… pun intended.😩 I am not a great sage, and this paragraph is just a thought experiment or food for thought. What if beings like us who are carbon based and reside on planets in the goldilocks zone of what we would consider to be habitable can’t sustain their species, let alone civilization, because of carbon pollution? What if beings like ourselves after billions of years of evolution finally develop civilizations, but soon thereafter discover fossil fuels to get most of their energy needs? Like us they are greedy, and have some human, conservative facets. After discovering fire the next logical step would be the burning of coal, so these beings would use fossil fuels before they ever thought to develop solar or wind power. A couple of centuries after their industrial revolutions conservative facets of their society may prevent the total switch to green energy before it is too late.

So, all over the universe civilizations developed by carbon based beings may be like candles, which light for a time then go out due to ruining their environment. Hopefully a few, including ours, would have made the switch in time. Maybe this is one reason why we haven’t been able to discover other civilizations amongst the stars… an exceptionally scary thought…thousands of Earth-like civilizations trapped like fruit flies in a jar.”

What a horrible couple of paragraphs which imply that most carbon based beings if ever developing civilizations would be doomed from the start. Perhaps that is the way of the universe since on our own planet after life first evolved about 3 billion years ago all species develop and eventually go extinct. Civilizations could be plentiful, but like most seeds never sprout to grow outside of their own finite planets. Aha! I wrote most…not all. I’m going to cast some aspersions on our own dealt hand in the solar system, but not rule out hope for others.

First we know that Earth is the only habitable planet in our solar system for us given present technology. We could, and it was hoped by the late Stephen Hawking, that after a considerable expensive undertaking Mars would be colonized to save the human species in the long run. I agree, but most resources should go into shoring up this planet’s environment via Marshall Plan type endeavors, but I digress. What if there are solar systems out there that are blessed with two or more habitable planets in a much larger Goldilocks Zone than that of good old Sol? What if these planets were located fairly close together such that after environmentally ruining one via carbon and other pollution the other could be easily be hoped giving the civilization of said solar system a much longer chance for sustainability and development, sort of like giving seed extra fertilizer? What I’m getting at is the issue of “allotted time” for our civilization and perhaps others to get their environmental house in order. Yes gulp, some scientists state that we only have about ten short years to right our own ship.

On top of that let’s suppose that such multi-habitable planet solar systems are located at shorter distances from the core of their parent galaxies such that other stars are closer and thus easier to reach. Alpha Centauri is our closet star located about four light years from Earth. There are zones or clusters of stars within the Milky Way such that multiple stars lie less than a light year from each other but not so close that they collide. Unfortunately, Sol is isolated on the outer skirts of our galaxy and quite alone just like Easter Island in the Pacific.

Did you now that our own medium size sun is a yellow dwarf, which is a larger and more unstable star than the more common red award? The larger the star the shorter its lifespan. Now, don’t get me wrong. The estimated life span of Sol is about 10 billion years, and has about 5 billion more to go, which is an inconceivably long time, but red awards should be stable much longer before exhausting fuel. Nonetheless, strong solar flairs that could affect Earth are probably more common with Sol than from these smaller stars. The solar storm of 1859, also known as the Carrington Event, should it occur today, would shut down computers and the Internet for months, threatening modern civilization. Inhabitants of Earth, mostly scientists as of 2018, are coming to realize that our situation as far as the cosmos goes is fairly precarious.

We have discovered recently an exosolar system orbiting a red dwarf that might have at least one if not more habitable planets, Gliese 581. So far six planets have been confirmed to orbit Gliese 581 located about 20.5 light years from Earth. These planets are located much closer to their star than those in our solar system, but might be habitable since Gliese, being a red dwarf, is cooler than our sun:

In conclusion  I hope that our civilization is in its infancy and that existential issues like carbon pollution and nuclear proliferation don’t kill the baby in the crib.  As we mature as a species there is always hope that we can learn our historical lessons well and discover solutions not even fathomable in 2018 making this essay moot. It’s my opinion that the threats to our civilization are great but can be overcome through good science, reasonable planning, and hard work.

Brrr! This cold spell in the Midwest has been impressive. Another example:

Yesterday’s high of 31° in Kansas City shattered the previous daily record cold high (previous 41° on 4/15/93) and also sets a record for latest sub-freezing high (previous 31° on 4/9/73), with a trace of snow recorded as well. 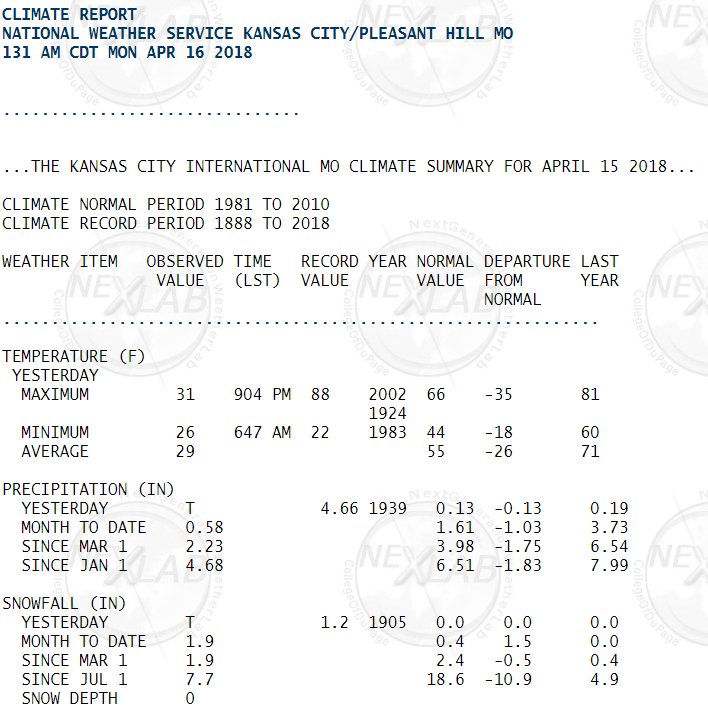